Back in February my cousin Cindy came close to buying a 2005 Mini Cooper convertible but we were a couple of hundred bucks from what the dealer wanted – and no one budged.

So we passed and then Cindy decided she wanted the newer model. Another Mini dealer in the area had a new 2009 they were eager to move so she bought there instead. It was pretty easy and totally low pressure. And the price and financing was pretty good. She was going to pay cash but the interest rate was so low (less than inflation) she financed part of it. 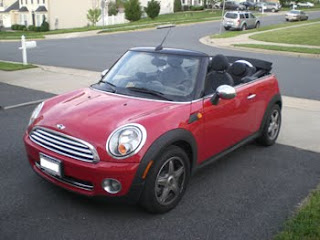 But the logistics were kind of challenging as we are both very busy and traveling a lot. So finally picked the car up after returning from a trip in late March. Then we finally hung out again this past weekend at my Mom’s house and I took the car for a drive and snapped a few pics.

For a convertible the structure is fairly solid. It’s got a lot of interesting features like the way the engine is started: Insert the key fob in the dash like a cassette tape and then hit the start/stop button.

The auto transmission shift map was fairly sporty, keeping a lower gear than other vehicles when you release the throttle to keep the engine in its powerband, steering was well weighted and the switchgear is unique – looks a bit like those in Spyker cars. 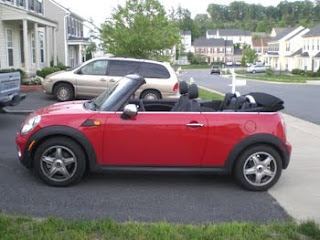 Another neat feature was the tailgate. It reminded me of a tiny pickup truck the way it would fold down to expose the modest trunk. The rear seats, by the way have fairly limited legroom as would be expected from such a small car.

One thing that did take some getting used to is the turn signals. The stalk has two modes for each direction. If you press it lightly the signal will flash a few times. If you press it further, past a subtle “click” it will keep flashing until you complete a turn. I’m used to cars with only one mode and a very positive “click”.

Same with the control for the high beams. And while certainly unique, I also found it takes longer to glance at the fuel gauge and speedometer placed in the center of the dash rather than near the steering wheel.

The leather seats were comfy, and the top opens and closes fairly quickly – I’m guessing about 10 seconds. It’s a fun, peppy car with good fuel economy too (25/34 EPA mpg rating). Overall, Cindy has been thrilled with it.